On May 8 of 2022, Cobb County citizens residing in the proposed City of Lost Mountain would have a unique opportunity before them as they approach their voting station booths. If approved the new city would be incorporated via the municipal incorporation process in Georgia.

What is the process of becoming a city?

A cityhood feasibility study is required by the Georgia legislature to determine if a proposed city would be viable and to make certain that its territory can provide sufficient public services for its residents. The Carl Vinson Institute of Government at the University of Georgia conducted this study for the proposed City of Lost Mountain in November 2021.

Once the feasibility study is complete then the legislature must pass a bill before the governor can sign into law a measure that will allow voters in West Cobb to decide whether to create their own city. If passed, the legislation will be on the table during the 2022 legislative session.

Finally, the citizens of the proposed City of Lost Mountain will get to vote on whether or not to form the city during a special election.

What are the boundaries of Lost Mountain City?

The proposed City of Lost Mountain will lie east of Paulding County, north of Macland Road, west of Noses Creek and Kennesaw Mountain National Battlefield, and south of Old Stilesboro and the southern edge of Lake Allatoona. 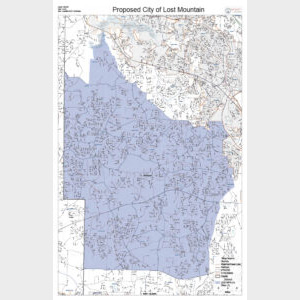 The proposed city is expected to have a population of around 75,000 residents. This would make it the 16th largest city in Georgia; larger than Alpharetta, Marietta, Rome, Dalton, and Smyrna.

Who will take part in the government’s activities, and what services will it provide?

The proposed city will be headed by a mayor and six council seats with elections for the positions being held soon after the city is incorporated. In order to fulfill its mission of local control while keeping costs down, the City of Lost Mountain will provide four services: Planning and Zoning, Trash Collection, Code Enforcement, and Parks and Recreation.